The End Is Near (To What Level Do We Fill Canals?)

The End is Near!  How near?
Well, I’m Not Exactly Sure

Where to “End” a root canal filling?
For a long time, clinicians performing endodontic treatment were deathly afraid of “overfilling” canals.  Many of these cases were associated with failure and exacerbation of symptoms.  It wasn’t until the real difference between “Overfilling/Underfilling” and ” Overextension/Underextension” of endodontic fillings was understood that a rational discussion of the topic could commence.  With the advent of the warm gutta percha technique, canals routinely became filled in three dimensions. As pressure was applied in a warm vertical manner, “buttons” of gutta percha, sealer or a combination became visible at multiple foramina.  This was commonly known as the “Boston or Schilder Puff”.

What immediately became apparent was that (regardless of those who opposed the intentional placement of this “foreign” material beyond the apex) these cases healed predictably. As long as the canal was sealed in three dimensions, this “Overfilling” was not of consequence. Yet today, there still remain segments of the Endodontic academia and research that disdain this technique because of the “puff”. They are rapidly becoming an anachronism as Dentists ” warm” to the idea of use of softened gutta percha with controlled heat and vertical pressure.

The need to establish the position of the apical foramen

The most critical piece of endodontic treatment information remains the size and location of the apical foramen.  Until the invention of reliable electronic location techniques, Endodontists had little to go on other than the Radiographic Terminus (RT) and tactile sensation. (Something that CANNOT be easily perceived with the use of engine driven rotary instruments) Study after study was used to discount the radiographic technique because of the obvious difference between the actual foramen position and its perceived radiographic location. In some cases, (Palatal roots of Maxillary Molars and Maxillary Lateral Incisors for example) the distance can be quite significant.

Just like the concept of Centric Relation in Prosthodontics, the RT is an artificial measurement, used ONLY because of its relative reproducibility.  (Even still, this can be “fudged”. Anyone who performs endodontic treatment knows how foreshortening of a film can make a short filled case look less “short”!) With reliable EALs, clinicians now have several methods (EAL, X Ray Image and tactile sensation) that, when combined, can produce very accurate results. It is still necessary to have radiographic confirmation because EALs (although very accurate) are not 100 % accurate in all cases. However, when combined with new cbCT 3D inmaging techniques, the question of “wher the canal ends” has become much easier to solve.

Working to the radiographic terminus

For many years, working to the RT produced excellent results, even though it was technically “long”. Why is this?  Mostly it was because although the instruments were “long”, the entire length of the canal space was adequately cleaned and shaped.  This allowed for better irrigation and filling of the apical third. In contrast, those who were afraid of “tearing the apex” or removing the “apical constriction” found that their cases were often filled short of the RT. These cases were associated with a higher rate of failure, mainly because it is these last few millimeters of the canal that are the most important for cleanliness and seal.

Experienced clinicians will confirm that filling “short” (especially in necrotic cases) invariably causes more concern for long-term success than overextending a case (as long as it is filled completely).  The importance of working to the RT has diminished with better EALs and cbCTs  but the concept of cleaning the entire length of the canal remains a staple of good endodontic technique. In Endodontics, it is always better to have “been there” than to “never have been there”.

Working to the “Apical Constriction” and apical patency

I have always been amused at those who use the concept of working to the “Apical Constriction”. Experienced clinicians know that this concept is a myth.  This because:

(1) It is almost impossible to locate the actual position of the constriction during measurement of initial working length. Its position depends on a myriad of factors (Root and canal curvature, dentin thickness, cementum thickness, apical resorption etc.) Often the true position of the constriction is only apparent AFTER the tooth extracted, sectioned and evaluated under a microscope.

(2) Curved canals become shorter as they are straightened. Failing to compensate for loss of canal length during treatment can often lose the initial “constriction”.

(3) It only takes one or two pushes of a size 25 or 30 file to remove any  “Constriction”. In many cases, poor access due to limited patient opening, patient movement or lack of length control can remove what little “constriction” there is in matter of a few seconds. 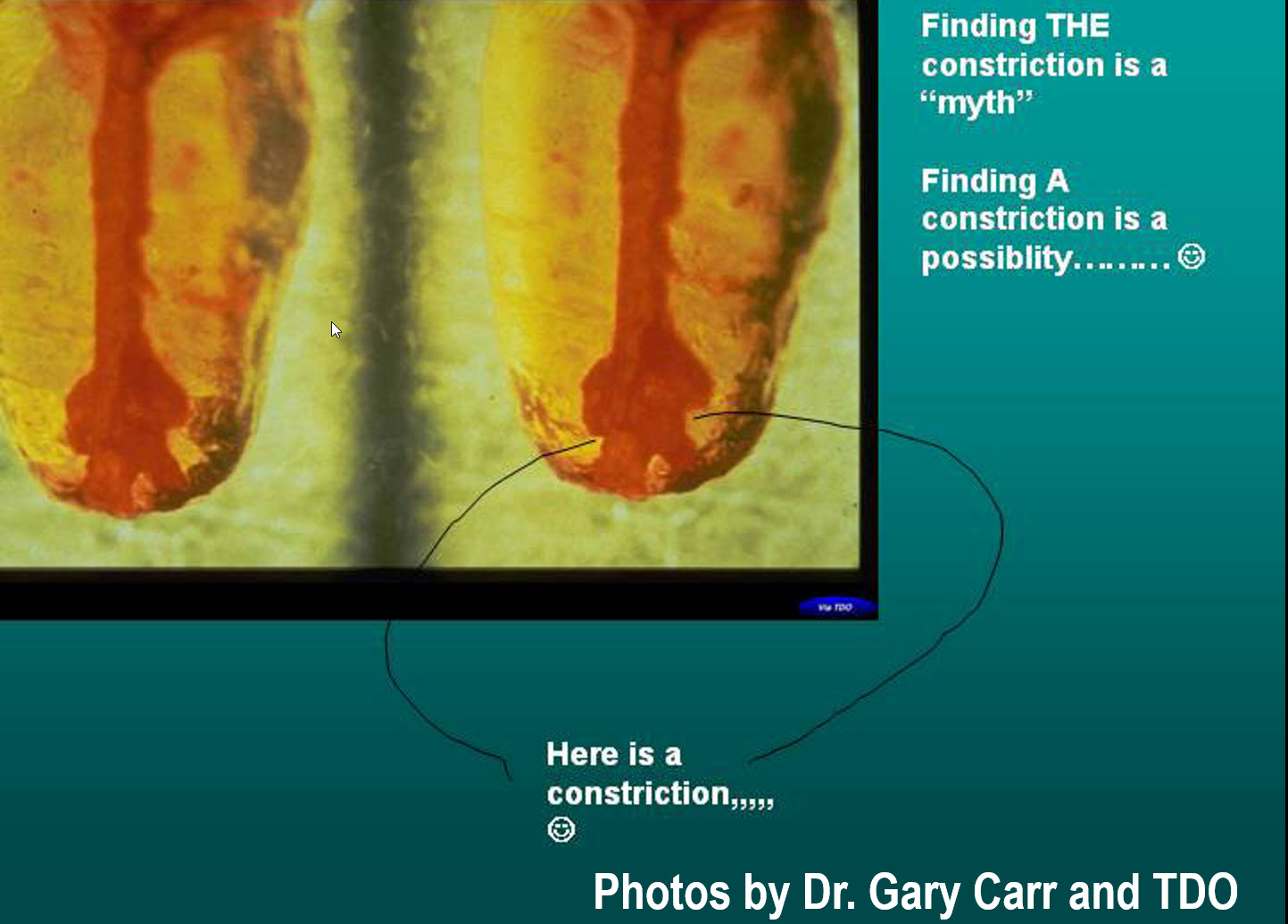 One additional adjunct to determining foramen location in such resorbed cases is the “Rosenberg Paper Point WL Determining Technique” which uses a paper point placed in the canal to assist in determining WL. See Another article in this section that describes it in detail.

Similarly, retreatment cases are often “reamed out” and do not have a constriction. However, they too can be reliably re-treated by routine filling to the radiographic terminus (perhaps technically “long”). If these cases can also be treated successfully without the presence of a constriction, is one really necessary at all?

The end is near and it is often closer than we think. Determining exactly where to end a root canal obturation must use  all available tools as well as tactile sense and experience will result in success. The keys to successful management of the end of the canal are:

(2) Maintain apical patency through the use of small files. Irrigate frequently.

(4) Use the EAL to check the working length before, during and after the canal has been cleaned and shaped.

Back to The EndoFiles OpEd Page